The Best CPU for Streaming in 2019

So you want to be the next Summit1g or Shroud? Awesome. You and everyone else. Streaming is so demanding and competitive that you absolutely must have the beefiest CPU you can handle or you won’t have a chance. Your choice of CPU is the most important in your entire build and it’s where you should spend the majority of your budget. Everything else is secondary. We’ve reviewed the top 5 CPUs for streaming in 2019 so you can build the best streaming rig possible.

While there is no perfect choice for a streaming CPU (it all comes down to personal requirements and goals), our favorite was the AMD Ryzen 7 2700x Processor. We were honestly blown away by how it handled all of the multitasking we had to do. If you’re looking for a fast, powerful processor capable of handling adrenaline pumping games, Twitch overlay, and your Bebo all-in-one streaming software, it’s the best choice. However, other models may offer better in-game performance (with decreased streaming) or may be more in your price range.

No matter what your personal requirements are, one of these models is sure to give you the best chance of turning your gaming hobby into fame and notoriety.

Its 8 processing cores and 16 threads provided the ultimate streaming experience, and when push came to shove (in the middle of streaming), it stood up to even our most rigorous streaming/gaming multitasking. 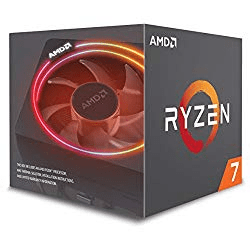 With the release of their 2nd-gen processors, Ryzen has redefined itself as a leader in the CPU processors space. Despite heavy competition from Intel, AMD now boasts 50% of the market share in the industry. And for good reason…

Its 8 processing cores and 16 threads provided the ultimate streaming experience, and when push came to shove (in the middle of streaming), it stood up to even our most rigorous streaming/gaming multitasking.

In the beginning, we were a bit skeptical because of complaints of low Instructions Per Cycle (IPC) from AMD customers, but those issues appear a thing of the past. AMD has improved its boost algorithms and the Zen+ processor achieves a full 3% more instructions per cycle than its predecessor.

When it comes to streaming, X264 encoding works better the more threads you have. AMD’s 2nd-gen streaming CPU has a full 16 threads capable of handling up to 4k streaming. You’ll have an advantage over any other streamer streaming in low-res. It might not have the in-game performance as competing chips from Intel, but if your goal is to stream, it’s the best choice currently on the market.

Despite having 2 fewer processors and 4 fewer threads, the Intel Core i7-8700K punches way above its weight. The higher base and boost frequencies have been packed into this piece of black magic to help stave off the AMD Ryzen onslaught.

This new Coffee Lake-S flagship chip was everything we wanted in terms of gaming performance.

If you’re a streamer who cares more about in-game performance and plays data-heavy games (with complex AI and heavily used physics), you may want to sacrifice a bit of streaming capability for an improved gaming experience.

Where Intel really rises above Ryzen is in its overclocking ability. It flat out overclocks like a champ. With the right cooling equipment, you can push your CPU’s performance to 4.7 GHz (HOLY ****!).

Don’t be fooled though, just because its streaming capability doesn’t quite measure up to Ryzen’s doesn’t mean it isn’t top of the line. You can still easily record in 4k and up to 60 FPS.

Same 8 cores, same 16 threads, same memory—the little cousin of the 2700x has plenty of the same features but isn’t as hard on the wallet. If you’re looking for an excellent streaming experience without the high-end price tag, the AMD Ryzen 2700 is a good buy.

Don’t get us wrong, the 2700x is definitely worth the money, but we understand that not everyone has deep pockets to build the ultimate rig.

All of the multitasking capabilities are still there and everything that makes the 2700x model unique also comes at the 2700 level.

SenseMI for better performance, improved IPC, and AMD’s world-renowned cooler are also included. The only downside is you’ve got to take a slight step back in terms of base and boost frequency. The clock speeds are lower than the 2700x.

If you’re a gamer that wants to get their feet wet in streaming before investing more money and needs a CPU with a high performance to value ratio, the AMD Ryzen 2700 is a great start. You don’t always need the absolute best model to stream like a pro.

Though it isn’t aimed at gamers per se, it is the best there is in terms of multitasking. If you’re into overcooking your CPU until it looks more like grizzled bacon, you’ve found your CPU. Sixteen cores and 32 threads means it can handle anything you throw at it and laugh it off with ease.

By increasing core counts and maintaining reasonable IPC, AMD continues to blur the line between prosumers and enterprises.

Of course, all of this performance comes at a price, both in terms of dollars and power. You’ll basically need your own hydroelectric power plant to keep it running, so be prepared.

However, the unrivaled (and unprecedented) core and thread count make it the ultimate multitasking machine. Use Bebo, have your Twitch overlay, play the most demanding games, and microwave last night’s leftovers (kidding!) all from one machine.

Our final entry is the most affordable on the list. Of course, as such it is quite the step back from its next-gen counterparts. With 6 cores and 12 processors, it handles 1080p just fine but doesn’t pack the punch that the 2700x does (or the 2700 for that matter).

However, what it does offer is great value for money. You still get high performance, all of the unique, built-in bells and whistles that comes with the AMD line, good clock speed (3.6 GHz), and you save a good deal of money while doing it.

The precision boost clock speed gets all the way up to 4.2 GHz. After trying it, it’s safe to say it’s a good mid range option and can handle high-intensity situations fine (it comes with a cooling fan!).

In-game and streaming and performance don’t quite measure up to other AMD models or Intel competitors, so whatever you save in price is balanced out by downgraded performance (not necessarily a bad thing when on a budget).

CPUs for Streaming Buyer’s Guide: How to Choose the Right CPU for you

The verdict is in: streaming your gameplay on Twitch, YouTube, and any one of the other platforms online is HOT. Just check out some of these stats:

It’s clear—watching others play video games is one of the world’s fastest growing industries.

Despite the rise in competition, the unprecedented rise in popularity means the door is still open for streamers of all skill levels to make their mark on the industry.

You just need to get the right equipment and get started. At the center of your streaming celebrity life will be your rig. Molded for streaming, capable of high-intensity gaming, and with better multitasking skills than a barista at peak Starbucks hours, your rig is going to be a workhorse.

At the center of it all lies your CPU….

Why is the CPU so Important for Streaming?

When you stream, you are doing two things: playing a game and streaming a video of it to your dedicated followers. And seeing as how the CPU is responsible for shouldering the burden of playing the game AND processing the video/audio, it’s by far the most important component in your rig.

Selecting the right CPU for streaming will allow you to record/stream gameplay in the highest quality at a high frame rate and resolution. If you don’t have a fast CPU, you’re basically cooked.

With that being said, it’s difficult to choose a good one. With so many options, confusing terms, and competing brands trying to mislead you about their performance versus the competition, it’s easy to be convinced that a poor CPU is actually a good one.

Don’t worry, if you stick to just the facts (as well as the experiences of our die-hard gamers), you’ll come out with the best in the industry.

Here’s what to look for in a streaming CPU….

How to Select a Streaming CPU

Since high audio/video performance must go along with strong gaming capabilities, streaming CPUs are slightly different from their counterparts. Here’s what to look for:

​Remember when you were young and your whole computer would freeze if just a single game froze? That’s life with just a single core. With just one core, you can only do one task at a time. So no streaming for you. With a high core count, your PC can divide tasks into multiple units. The more cores your CPU has, the more dynamic it will be. So, if a CPU has 8 cores, that means it be able to handle a massive number of tasks at a time, meaning you can stream, play, and do whatever else you want without a downgrade in performance.

​Cores are actually a physical subset of the processor whereas threads are the actual processes that the core can handle at one time. Basically, the higher the thread count the more work your processor can handle. The more threads you have the better streaming works.

​The clock speed refers to how much data your CPU can handle during a given time. The higher the clock speed the more tasks your CPU can complete. Your CPU will be more responsive when running heavy tasks (like streaming), meaning a better streaming experience. Thankfully, most of today’s CPUs have at least 3.5 GHz, so you won’t really run into problems.

The CPU you choose is by far the most important component in your streaming rig. As we said before, the vast majority of your budget should be spent here. It is the engine that your rig will run on. While there is no “perfect” CPU for streaming, our experience with each showed the AMD Ryzen 2700x to be king. Of course, take our buyer’s guide to heart and do some research for yourself if you really want to. But trust us, as soon as you invest in a high-end processor, you put yourself head and shoulders above the competition.