What’s more, there are a lot of different brands and models to choose from. Choosing one would be hard enough, but as headset makers also like to use buzzwords, conveniently inserted technical terms and marketing ploys to sell them to us, it can be downright headache-inducing.

However, with a bit of research, anyone can find a great headset for a fair price. Below are our personal recommendations for the best gaming headsets, as well as the best budget gaming headsets on the market today.

We’ve also written a buyer’s guide to make shopping for one easier on the mind, as well as on the wallet.

SteelSeries Arctis is our top pick for best gaming headphone in 2021. It features Ski-Goggle Suspension Band  and ClearCast Bidirectional Microphone and super comfortable design and snug. 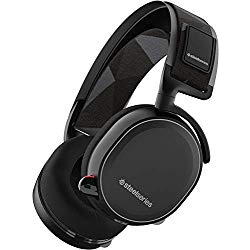 With the Arctis 7, SteelSeries has really nailed all of the most important aspects of a premium-priced headset.

As a wireless headset, it works on a 2.4GHz radio band instead of Bluetooth, which is always preferable.

On top of that, it has 7.1 surround sound, great audio quality, a 24-hour battery life and a host of other useful features.

The best part is that, despite what it brings to the table, it won’t set you back too much. Compared to most other surround sound headsets, the Arctis 7 is truly a bargain.

If you’re looking for a great gaming experience on PC, then the Arctis 7 is a very affordable choice with all of the extra goodies the pricier headsets have. However, for consoles, it’s a bit of a gamble for sure.

One of the more cost-effective gaming headsets on the market, the Logitech G Pro is a solid choice given its asking price. It has a few worrisome problems, however.

First, let us go over the pros of this headset. It’s very well built, perhaps not up to par with - say - the Arctis 7, but it still feels very solid. As far as audio goes, the G Pro won’t give any audiophile brand headsets a run for their money anytime soon, but it should do the trick for most gamers.

It’s a little light on features, but for the price, that shouldn’t come as a surprise.

One feature the G Pro has that most other headsets lack is a removable microphone and cable.

Aside from making the storage easier, you can also easily replace these parts, should the need ever arise. As we all know, the cable is the part of a headset that tends to break the most. Being able to replace it easily is a big plus.

However, the G Pro has a few problems too. Its microphone isn’t anything special, but it can work well enough if used with the right sound card. Without the right sound card, the mic may sound very quiet, which isn’t very useful at the end of the day.

If you have a good enough sound card, the G Pro is a great buy. Otherwise, it may be better to spend your money elsewhere, especially if you plan on using the microphone a lot.

Another surprisingly affordable headset for what it offers, the Razer ManO’War deserves high marks in almost every category, except for a very important one.

Sadly, what holds it back at the end of the day is its shoddy build quality.

But, first, let’s go over what Razer has done right with this headset. Given its price tag, it offers quite a lot in the way of features.

The ManO’War uses a 2.4GHz radio band, has 7.1 surround sound, boasts a great battery life and fairly good audio for a gaming headset, as well as a decent mic.

It’s comfy to wear, even if it is a little bulky. Thankfully, it’s light enough not to pose a problem. Like most gaming headsets, it works on PCs, as well as on the current generation of consoles.

What holds the Razer ManO’War back is its shoddy build quality. The headband is flimsy and prone to breaking after only a few months. While Razer may have addressed this issue at some point, it’s still a bit of a gamble. Aside from that, the ManO’War is a good headset for the price.

As far as wired surround sound headsets go, the HyperX Cloud Revolver S beats most of its competitors at this price point by a mile. It does most of the things I expect a premium-priced headset to do, but at a much lower price.

The Cloud Revolver S deserves high marks in just about every category: audio, construction and durability. And, on top of that, it boasts 7.1 surround sound.

It does have a few cons, namely its less-than-great mic monitoring feature and sidetone control. But, that isn’t a dealbreaker, especially given that it isn’t really a premium-priced model.

All in all, the HyperX Cloud Revolver S is a solid choice for PC and console gamers alike.

More often than not, when it comes to headsets, you get what you pay for. And that’s especially true with the SteelSeries Arctis Pro.

Everything about this headset yells “premium”, from its polished steel headband and aluminum alloy hangers to its high bitrate audio drivers and built-in DAC (digital-to-analog) converter.

Of course, its price tag yells “premium” as well, but if you can shell out the extra cash for it, this headset is one of the best gaming headsets on the market today.

Its only real flaws are a low volume mic issue on the PlayStation 4 and a finicky sidetone control.

Seeing as both problems can be fixed through software updates, it shouldn’t stop you from buying this otherwise fantastic headset.

What to Consider When Buying a Gaming Headset

It’s no secret that, today, the home audio equipment market is a tiny bit crowded. While you can always count on three or four trusted brands for speakers, stereos, and products of that sort, it’s tougher when you’re out shopping for headsets, headphones and the like.

Simply put, there are a lot of options to choose from, too many even. Even if we narrow our list down to “gaming” headsets, there are still a lot of questions left. Am I looking for a wireless headset or a wired one? Do I need a surround sound-capable headset? What platform do I need it for? Should I look for one that’s noise-canceling, or not?

Before you can find the right headset, you have to know what to look out for. To help make your headset hunting go a little smoother, we’ve written this buyer’s guide. Keep in mind that while this buyer’s guide is tailored for gamers, anyone can learn from it.

Before we get into the nitty gritty, it would be helpful to narrow down the field a little first. The question is: should I invest in a fancy wireless headset, or just go with an old-fashioned wired one?

I often hear from others that wireless headsets don’t sound as good as wired ones. While that’s true in some cases, most of the time, it isn’t. It’s true that wired headsets can sound better than wireless ones, but only if you listen to very high-fidelity lossless audio. That just isn’t what you hear in video games, or even in most music.

Bitrate is a way to measure sound quality. MP3s are limited to a bitrate of 320 kbit/s. A PlayStation 4 can output audio at 640 kbit/s, but the sound files video games use can be as low as 192 kbit/s.

Today, wireless and wired are almost on par. There just isn’t a noticeable difference, especially when playing video games.

In the early days of wireless audio, Bluetooth headsets, headphones and earbuds all sounded fairly bad. However, that thankfully isn’t the case anymore. Nowadays, a Bluetooth headset can offer good audio, range, as well as compatibility across a lot of different devices.

However, 2.4GHz WiFi headsets usually offer slightly better audio and a longer range. The trade-off is that they’re pricier than Bluetooth headsets and don’t work with as many devices (they come with a USB receiver dongle, which I can’t plug into my smartphone, for example).

Wireless headsets are, on paper, a lot more convenient than wired ones. After all, I don’t have to deal with any wires, cables or the like. However, once you take away those pesky cables, your headset has to rely on a battery to work.

Nowadays, most wireless headsets can last 10 to 15 hours on one charge, which is enough for most gamers. Premium-priced models can last up to 30 hours per charge. Still, unless you’re willing to pay extra, you will have to recharge your headset more or less every day. If that’s a compromise you’re willing to make in return for not having to worry about tying those cables up at the end of every play session, then a wireless headset may be worth it.

That said, if you’re a PC gamer, then you probably won’t have to unplug your headset at all, assuming you play at your desk. In that case, I’m not sure if paying extra for a wireless headset is worth it. At the end of the day, it’s up to every gamer to decide for themselves.

In the end, it all boils down to whether the extra freedom of movement justifies the price tag to you. For most console gamers, I reckon that it does. But, for PC gamers, more often than not, I’m willing to bet it doesn’t. It’s all a matter of personal preference, though.

Surround sound or not

On paper, a surround sound headset should give gamers a massive advantage. After all, anyone who’s ever played a first-person shooter (FPS) game, such as Battlefield or Call of Duty, will tell you how important it is to be able to react quickly to the slightest of noises.

If you’re able to judge where the sound of your enemy’s footsteps or shots fired in the distance are coming from more accurately, then you can have a sizable edge over your opponents.

Another thing worth talking about is the term “noise-canceling” and how it differs from “noise-isolating”.

Noise-isolating headphones and earbuds work by muffling the noise around you. Usually, they’re better at muffling voices and higher-frequency noises, but all of it depends on your ear type and the environment you’re in.

Sadly, we often see headset makers confuse the two terms. As a result, it’s hard to know if a headset is noise-canceling or noise-isolating.

It can take a fair amount of time and effort to find the right gaming headset in today’s market. We always recommend looking at the customer reviews section on Amazon to get a better idea of how a particular headset performs, especially if it’s going to be used on different platforms (such as a PC and a PlayStation 4).

Hopefully, after reading our recommendations and buyer’s guide, you will have an easier time shopping for a gaming headset.